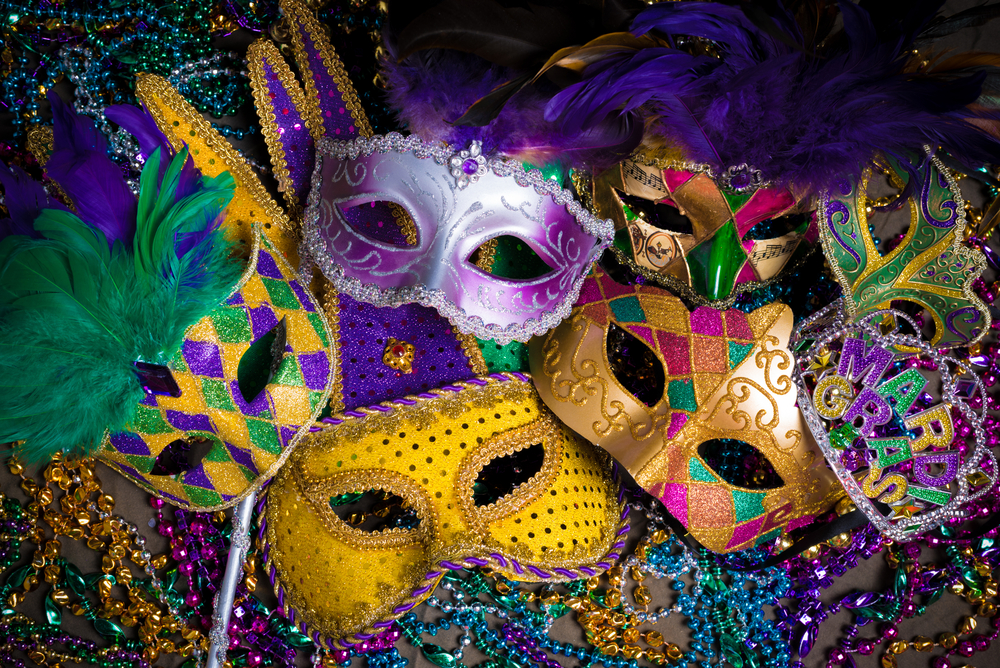 In Louisiana, Mardi Gras is a big deal. It’s not only a legal holiday, it’s become a legendary part of the culture, bringing hundreds of thousands of tourists to the New Orleans French Quarter every year to celebrate. With some creativity, you can bring a little taste of “N’awlins” (and Mardi Gras!) to your senior community. Every year, Mardi Gras is in either February or March, based on the date of Easter Sunday (46 days before Easter). This year, Mardi Gras is on February 13.

What is Mardi Gras?

The history of Mardi Gras goes way back. The age-old pagan spring festival began in ancient Rome and was later adopted by Christian leaders as the “12 Days after Christmas.” In Italy, France, and England, masked balls were a way to celebrate the Twelfth Night, known as King’s Day or the Epiphany, a reference to a story in which three wise men bring baby Jesus gifts of frankincense, gold, and myrrh 12 days after his birth (just like what’s referenced in the popular song “We Three Kings”). The balls and parties were so popular, they continued until Shrove Tuesday/Fat Tuesday/Mardi Gras (they’re all the same day!), the day before Lent—the final shebang before the 40-day abstinence started. In other countries, the period of time between Epiphany and Fat Tuesday is called Carnival, translating to “farewell to meat,” probably due to lack of refrigeration back in medieval times. (The Carnaval celebration in Rio de Janeiro, Brazil, is considered the largest in the world.) The whole idea was that merrymakers would binge and feast before the fast.

Mardi Gras in the U.S.

Mardi Gras became a European holiday in 1582, but didn’t hit landfall in the U.S. until the late 17th century, when French explorers set up camp near New Orleans—naming the spot Point du Mardi Gras—after the holiday celebrated in France. In the years afterwards, French settlements marked the holiday with masked society balls and extravagant dinners. When Spain took over the territory, these “rowdy rituals” were banned and masked balls associated with the holiday were outlawed. It wasn’t until 1827, after much convincing, that wearing a mask in the street was legalized. Many of the customs were brought to the U.S.  Street processions of horseback riders and masked revelers in carriages started in France, but in order for the crowds to see the parade, men carrying flambeaux—or flaming torches—debuted here in 1857. *Fun fact: By law, all float riders must wear a mask while parading. Legend has it that the masks were worn so that classes could intermingle without restrictions. On Fat Tuesday, “masking” is legal. Have fun with this! Pass out masks and wigs at your senior community.

The official colors of the Carnival season include gold (power), purple (justice), and green (faith). The colors were inspired by the royal house of visiting Russian Grand Duke Alexis, who became “Rex,” or king of the carnival. Decorate in the colors of Mardi Gras!

Throw Me Something, Mister!

Krewes, acting as secret societies, work all year to plan Mardi Gras balls and parades. There are multiple parades leading up to Fat Tuesday, from the all-female Krewe of Muses (throwing glittery shoes) to the Krewe of Barkus (for dogs), to the music-themed Krewe of Orpheus, founded by Harry Connick Jr.

In 1870, one of the original secret societies, the Twelfth Night Revelers, started handing out small toys and strings of beads during the parade. (It was good luck if you caught the beads.) In the 1930s, krewes started throwing wooden nickels, then graduated to brightly colored aluminum coins, called doubloons. Today, “throws,” or the goodies you can catch during a parade, include doubloons, plastic beads and an array of stuffed animals, cups, toys, and Frisbees, often stamped with the krewes logo. The most prized throws include coconuts hand-painted by members of the Zulu Social Aid and Pleasure Club (only these ones, due to liability issues and not wanting to hit someone in the head with a coconut, are handed out in bags.) Encourage residents to yell, “Throw me something Mister!” and have your own parade, passing out doubloons or beads. (The beads will  make your party more festive.) Another way to add to the festivities? Play some classic Dixieland jazz music during your parade.

The King Cake is an oval shaped coffee cake, braided and covered in green, gold, and purple icing. The cakes come with a small plastic baby to insert inside the cake, and whoever cuts the slice of cake with the baby inside is king for the day (and responsible for buying the next king cake). The tradition is an acknowledgement of the Three Kings and the Feast of the Epiphany, associated with the gifts brought to Jesus. *Celebrate with your own version of King Cake and champagne glasses of sparkling cider or N/A champagne.

You don’t have to gather in the French Quarter of New Orleans to celebrate Mardi Gras. Now you can let the good times roll right where you live.